How did I get into this hot mess?

on April 15, 2013
If I think about it, this has to be one of the most fun messes I've gotten myself involved with. I'm speaking of motorcycles. Technically, just one motorcycle. Unlike most people who are into motorcycles that grew up with them, I really didn't. As a kid in the Philippines, I had learned that at one point my uncle was professional motocross racer and I have memories of him taking me around on this dirt bike and I even recall his Super Bike style race bike. 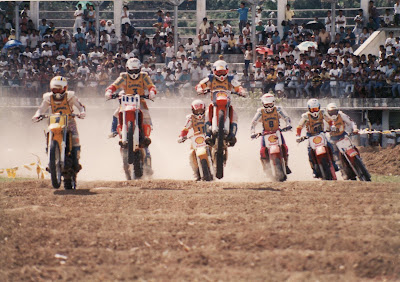 That was the extent of being exposed to motorcycles. My brother and I grew up always wanting motorcycles and we used to put cans between the fork and front tire of our BMX bikes to mimic the sound of a dirt bike.

Then in high school, I got this itch to buy a moped. It was a 1977 Puch Maxi, a blue one with 49cc. I recall paying around $150 back in 1993. I loved that thing, but I recall it always breaking down. I sold the Puch and got a Free Spirit moped, same thing, it broke down all the time. But from working on it, I learned how to fix these things. In fact both mopeds I blew the piston rings 2 times each because I didn't' get the oil/fuel mixture right, those were 2 strokes. 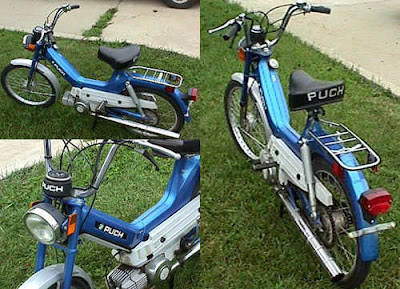 Fast forward 20 more years...yep. Gas prices had started going up and up and I wanted to get a moped again. But lucky for me one of my customers at my old job had a pit bike he didn't want anymore. He told me that it's been sitting at the side of his house for 8 years. No papers, no tags, no plates...nothing. He did give me a bill of sale. Oh and here's the best part, it was free!

This was my first scooter, a 1989 Yamaha Razz Riva, 50cc. I got it running and even rode it to work more than a few times! 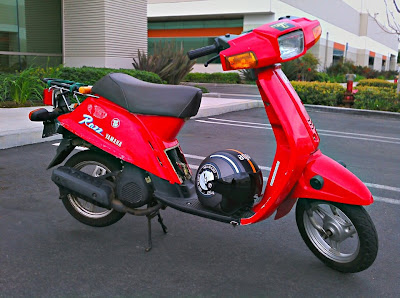 After getting it up and running, I had to go through the process of getting it registered with the DMV. It's a big hassle, but worth it. First thing I had to do was go to the DMV, pay $87 to register the thing. But it had to pass the CHP inspection before I could get the plates. So I had to got to the local CHP office, make an appointment for a later date on when they could inspect my scooter. I return about a week later with the scooter on a hitch carrier on the back of my van. The officer looks at the vin#, looks at the paper work, then disappears for about 15 minutes. He comes back with the paper work all signed. Then I have to go back to the DMV and present them the inspection forms so I could finally get my plate! Phew!

About a month later, I sold the scooter. There were number of other scooters on Craigslist that were being sold for way less, almost half of what I was asking. But none of them were registered nor did it have a pink slip. So my selling point was the fact mine was street legal and it had all the paper work. It was actually a quick sell. Sold it to some 19 year old kid that needed it for work.

Two weeks go by and I don't have a scooter. But I kept looking on Craigslist for the next best deal and I had found it! It was a 2007 Honda Elite 80 for a mere $850. All the other Elite 80s were going for more than $1200 on CL. I test rode it, and bought it without negotiating. Only problem was the front wheel was slightly bent. But I replaced that with a new one from Ebay. 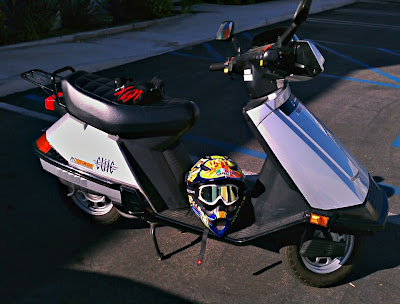 I really liked this scooter. It was newer, fun, way faster than the Riva and it was really pretty! But what I quickly found was that I REALLY liked going fast. The Honda elite 80 would top out around 55mph, and that's with me tucked all the way in and have the wind pushing me from behind. So after a few months I sold it in hopes of getting something bigger. I wanted another scooter, but if I could find a motorcycle, then even better.

That's when I found the 1981 Honda CM200 Twinstar on Craigslist. As you may have read on my previous article, the bike was in bad shape. But with some elbow grease and determination, it became my cafe racer.  You'll have to read the cafe racer transformation to see all that I did to it.