The Moe of TheBikeGeek.net Gives a nod to the Cafe Racer

on April 19, 2013
One of my long time friends, The Moe, who happens to run TheBikeGeek.Net has always had Harley Davidson motorcycles. They are beautiful machines and the one he has now is a Heritage. Not only is that a pretty motorcycle, but wow, it rides like a dream!

The other night The Moe stopped by and was eager to see the newly converted Honda CM200. He had ridden the bike before but I think the last time was about a year ago, right around the time when I first got it.

Upon arrival, he was excited to say how much he loved the way it looks. I gave him a tour of the things I've to it and all the parts I changed out and etc. I told him to grab a helmet and go out for a ride, he gladly obliged.

One thing he was surprised with was how small the Honda CM200 is. It really is a tiny bike in comparison to any Harley Davidsons out there. I think it's even smaller than a Honda Rebel. So off he went into the dark and comes back some time later with a huge smile across his face. First thing out of his mouth was, "Oh man, I WANT ONE!!!" He loved how the bike rode and felt.

Though The Moe loves his HD, he has been talking about getting a smaller commuter bike such as a cafe racer and I think riding the Honda CM200 Cafe Racer helped convince him even more. Here's a photo of The Moe after coming back from his ride...all smiles! 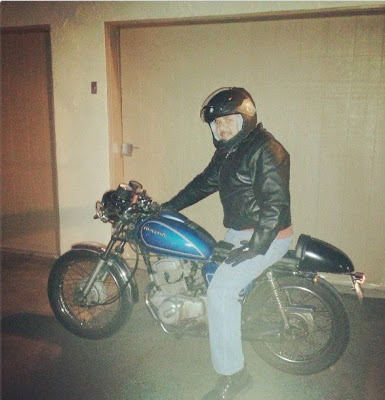