on May 01, 2013
Just recently my Vintage Motorcycle, the 1981 Honda CM200 Twinstar Cafe Racer needed a new rear tire. I purchased the bike over a year ago and nearing 5000 miles since acquired, it was time to replace the rear tire. I had searched and searched for a replacement, but no one seemed to carry the old tire that was mounted, a Kenda Kruiser 16". After checking out some forums and Yahoo Groups, someone recommended the IRC GS11 Rear Motorcycle Tire 4.60-16 XF87-5376. 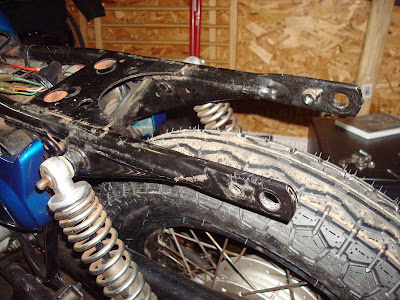 After my buddy Loren installed the new tire, I mounted the wheel with the new IRC wrapped around it. First glance, it looks awesome! Not only is it wider, but the treat pattern is more aggressive than the Kenda Kruiser. But as soon as I sat on the bike, the new tire was hitting the cafe race seat mounts that I made. Uh oh...I rolled the bike around in my garage to see if there was any other spots it was hitting. Well..sure enough it was hitting the base of the cafe seat. Basically the tire was traveling beyond the frame and since the cafe seat sits right on the frame, it was hitting it when weighted.


It was a long night so I went to bed trying to figure out in my head how I'm going to address this issue. I did have a few options, 1) Get taller shocks. OEM rear shock is 12" eye to eye. I figured that if I got 14" rear shocks that would clear the tire. 2)Get a new cafe racer seat that would accommodate the rear tire. I've seen some that have a bump on the seat for fender clearance. 3) Reinstall the OEM fender since that allowed clearance for the rear tire to travel up beyond the frame. Then figure out how to mount my current cafe race seat. 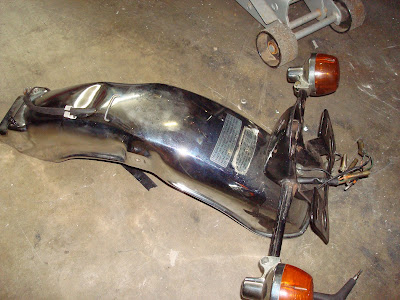 Before I could install the fender, I had to create a new seat mount out of the composite wood. This time I had to shape it to make room for the fender. I also used a piece of aluminum as a brace so the fork section of the composite doesn't move too much. 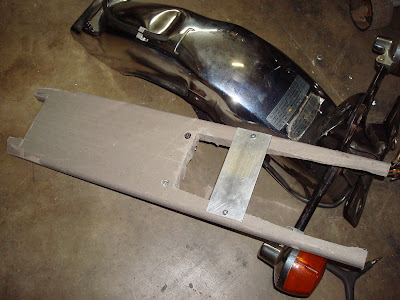 The problem I had with the cafe seat and the fender was clearance. As is, the seat would be hitting it. Not sure if you can tell, but I took a rubber mallet and hit the fender with it to clear the seat. 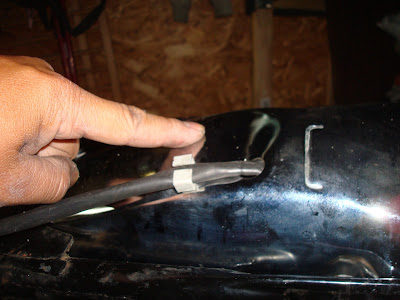 Here's a better view of it. Doing this allowed me to clear the fender and allow the rear wheel to travel. 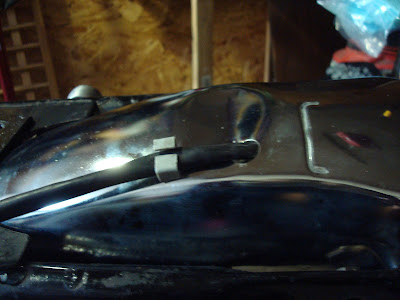 Here's how it looks now. I LOVE IT! This was what I originally wanted to do. I wanted to keep the rear fender while mounting a cafe racer seat. I like this look because the bike looks truer to it's period and it has a handsome resemblance to a Triumph Thruxton. 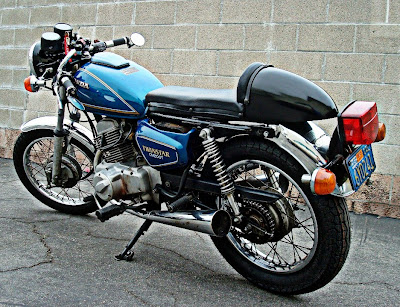 Now the tire clears just fine, only issue I have and which I've already addressed is the tire hitting the plastic chain guard. I grinded out the section that was hitting the tire. With this new set up,  I do feel that the bike is sitting up higher in the rear, and I like it! I was afraid that the handling would be somewhat affected, but to my surprise it hasn't.