on May 06, 2019
Yep, I pulled the trigger on this little machine. Out the door/registered/delivered to my home, $1250. This bike is something I've been looking at for about 3 years now. They seemed like a lot of fun and the Clones are way cheaper than the Japanese kind.

First impressions:  Fit and finish is relatively decent. There's a lower fairing that fits under the motor and installing that was tricky since the bolt holes didn't line up properly. Everything else was a breeze to install. The front wheel and bars were the only thing that needed to be assembled.

How does it ride? First and foremost, I had some vapor lock happening. I couldn't get it to start right away because there's some sort of breather valve that was broken. The picture below was when I got stranded after it just died. I had plenty of fuel, had spark but it just wouldn't run. So finally I pulled off the fuel line to make sure it was getting to the carburetor. Once I did that a loud hiss came out of the fuel line. That's when I knew it was vapor lock. I reattached the fuel line and opened up the gas cap to let it flow again. Luckily I was only a mile away from home. I was able to nurse it back to my garage. I ended up removing that valve and since then, the problem hasn't come back.

So I'm sure you're wondering how this thing rides. Well, quite honestly it's slooooooow! I didn't realize how slow it was. Nothing I read on the forums or Facebook mentioned how slow this thing is.  First gear is super quick. You'll need to shift right away just so you don't redline the thing. Another thing, it's really quiet, too quiet for my liking.

I had joined a couple Facebook groups that specializes in these clones. I was impressed by the knowledge of the people there. I could easily ask a question and get a great answer. One of the first thing I wanted to do was upgrade the exaust. The OEM muffler is basically a slip-on. So I ordered a generic one from Ali-Express, total only cost me about $50.

I probably should mention that prior to any mods, my top speed was a blistering 47mph. At that point I started to regret buying this thing. Slow and even with an exhaust mod, the top speed only went up to 49mph. After that I replaced the OEM 14t sprocket and installed a 16t. The sprocket mod by it self made the bike more ridable. First gear was a bit longer and now my top speed was more like 52 mph. 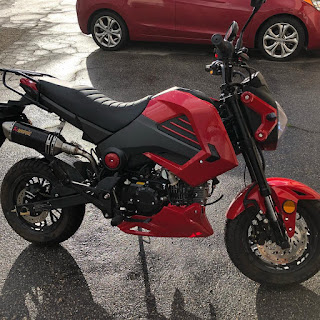 I still wasn't satisfied with the performance. So I reached out to my new friends on Facebook and got some advice. That's when I ordered a 26mm high performance carburetor. I wish I had taken pics of the OEM and the new one, the size difference was incredible!

After installation of the carb, I went ahead and removed any of the emissions garbage as well as the airbox. I took it out for a test and and boy....this bike woke up! Holy smokes! What a game changer this carb was...I was now able to hit 62mph! The bike performs so differently and I can't believe how much more fun it is to ride.

My initial regret of buying this bike quickly dissipated as I rode this newly transfored machine. Though it's only a 125cc motor, the performance does remind me of my old CBR250r. There seems to be a big subculture with these bikes where people will spend up to $10k by doing engine swaps with a 250cc or a 300cc motor to make them faster. But for me, I'm happy how things are and will keep it at 125cc. This is my in town taco shop/bar hopper bike, so there's no need to have a big motor. I can now easily keep up with traffic and split lanes easier than my big cruiser.

If you're on the fence about getting a Chinese Clone, I say get it, then do the mods that I did. Keep in mind, you may have to tinker with it to get it just right. Once it's dialed in, you'll be having a blast on it.