on November 15, 2019
Not sure if you recall, but I purchased this Harbor Freight Trailer back in spring 2019. I assembled it, then just put it away in the garage until I really needed it. I wanted to register it here in California, but to get a DMV appointment would have taken months, it was more of a hassle than anything. So I just registered it in Vermont, much like how I did my scooter. I just mailed in my paperwork with a check payable to Vermont DMV and got my plate and registration within 15 business days.

Now I'm sure many people think that stuff from Harbor Freight is crap. Eh...that could be debatable. In all honesty, I have a lot of HF tools and frankly they've never failed on me. The only tool I had that eventually died was an electric impact that I had over 5 years. Mind you their stuff isn't meant for professional mechanics, but for someone like me who wrenches on things for kicks and giggles, their tools work just great. The best part is, they're affordable!

Ok back to the trailer. Assembly of this was relatively easy. Directions were...decent. As long as you follow it, you should be fine. You just need basic tools such as a socket set and ratchet. It would make things easier if you used an impact gun, otherwise you'll get tired quick turning those ratchets.

The purpose of this trailer was for me to haul scooters and motorcycles. So I installed a wood floor and eventually side rails (not shown). I also installed a motorcycle wheel chock that I could easily install and remove. 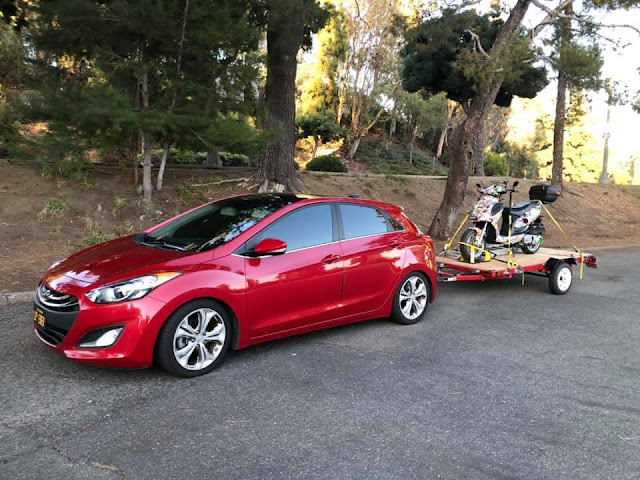 This was my intended use for the trailer. Hauling scooters here and there. The photo above was a time when I took a friend out to ride my scooter. She wanted to give it a try, so we drove to an empty parking lot and she rode it around.

Eventually an opportunity presented itself in the form of a free motorcycle. A friend gave me this Suzuki Savage. It didn't run, so naturally I grabbed the trailer and headed to his house to haul it away. The trailer was solid, very smooth and no issues at all. 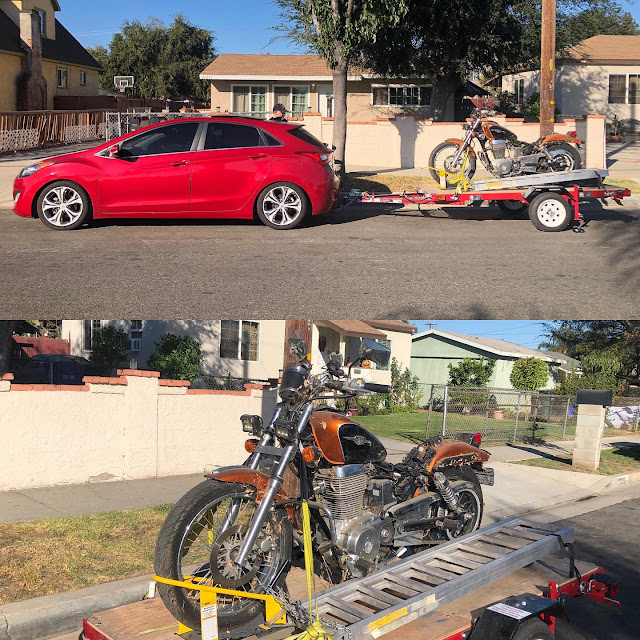 What's not pictured are the mega D-Rings I installed on the trailer. Oh wait, iof you look on the bottom right corner of the photo above, you can see it. Right behind the tail light is the D-Ring. I bought it off Amazon for super cheap. It was a set of 4 with hardware and I think it came out to less than $24. All I had to do was drill holes and tighten down the carriage bolts.

Another opportunity came to me via my brother. He was thinking of selling his Sportster 883. He hadn't ridden it much all year and wanted to get rid of it. I told him if I had the money, I'd take it off his hands. Then he said, "Merry Christmas, Happy Birthday and all that, come pick up the bike, it's yours." Ya for reals he said that! I thought he was messing with me, but he wasn't! Mind you, my brother is one of the most generous people I know, so this gesture wasn't out of his character.

With that news in mind, I added some more features to the trailer. I ran a protective sleeve for the wires from back to front. I also bought a trailer jack and a spare tire. Now that I have all those things in place, it was time to go to Yuma, Az. This is about a 5-6 hour drive, depending on how bad traffic is. I loaded up the trailer and left after work. Got to Yuma later in the evening. I spent the weekend at my brothers and on Sunday morning, we loaded up the bike and I was headed home. 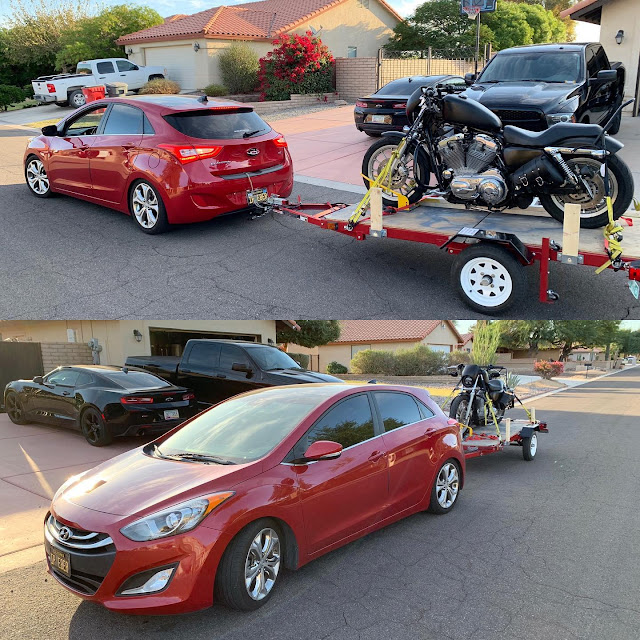 My 2014 Elantra Gt's towing capacity is 750lbs. Having the Sportster and trailer pushed it right to the edge of my limit at 740lbs...yikes! So I trudged along through the desert while maintaining a highway speed of 55mph. No major hick ups along the way except for the straps started flying and wrapped around the axle, easy fix and I kept driving.

7.5 hours later I got home. Phew, that was a long drive! That bike never moved, shifted or bounced. The trailer did a great job and my car was fantastic! 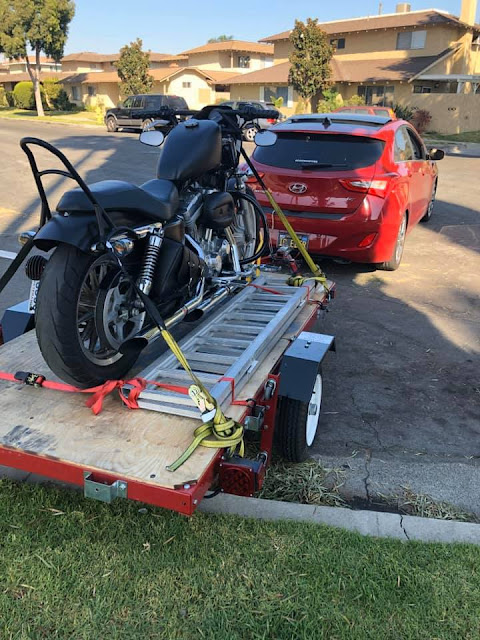 After unloading the bike, I parked it in the garage, folded up the trailer and went inside my home to relax. I was exhausted. That was the first time I've ever towed anything for that amount of time and distance, needless to say I was stressed the whole time. But now that I've got that under my belt, I feel really confident in doing it again if needed.

The very last thing I upgraded on the trailer were the cheap caster wheels. You can see below the oem, notice the bearings? Yep, they started coming out and it eventually was hard to roll. I ordered these rubberized 3" wheels. A set of 4 was $19 on Amazon. I did have to make the mounting holes a bit larger. But once I got them on, those wheels were smooth like butter! 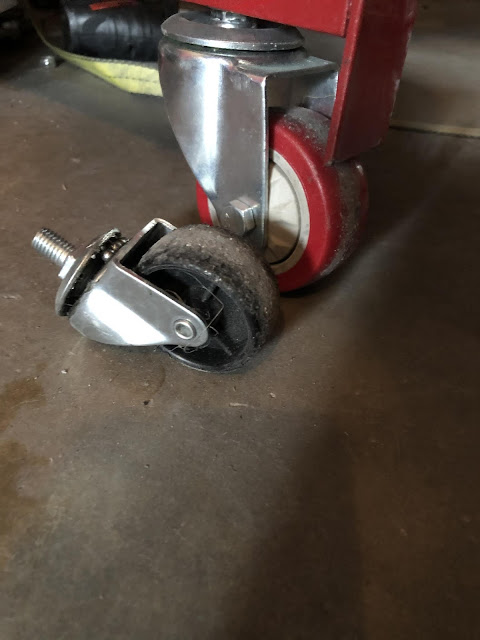 Ok let's go back to the idea that HF stuff is cheap, look I'm not going to argue that. But I had people who questioned my trip with the trailer. They weren't so sure if it would be safe nor would the trailer survive such a long drive. Here's the thing with me, I trust my work. I think what I like most about building the trailer is that I did put it together myself. I know each and every single bolt that went on there was super tight. I even used Loctite on the bolts that didn't have a nylock nut on it. It's a solid trailer, very satisfying to build up and customize. Would I build another one? Nope! That thing was back breaking...ugh, my back was so sore after building it. However, this is a great way to get into a trailer if you need one. The most awesome feature of it is how it folds. I can just roll it into my garage when I don't need it and pull it out when I do. Storing this thing isn't an issue at all.

Would I recommend it, heck yes! My suggestion is, don't rush the build process. Follow the directions and customize it to your liking. Enjoy!