on June 09, 2019
For years I've wanted to own a Grom Clone. I had seen all the mods you can do to them and often day dreamed of doing the same to my very own. When I finally decided to get one, I was beyond excited! Finally I had one!

So the problem began when I realized that the Clone was mega slow. It wasn't even funny how slow it was. It took some mods to get it to keep up with traffic. Plus the shifting sucked on it. I would have a hard time finding neutral and going from first to second. Many of the people who owned one commented of the same issues. They seem to all say that once I hit 100 miles, things would get better with shifting. They were partially right, but it still sucked.

If you read this blog at all, then you'll see that I'm a big fan of Chinese scooters and small displacement bikes. The Clone was both but I couldn't fall in love with it. At a certain point I started to regret buying this thing because of all the extra work that I needed to do just to get it riding the speed limit.

So I decided to list it for the same price I had into it...give or take a few bucks. I had an immediate response from wannabe buyers. Of course many of them would say they could get a brand new one for the same price. I often would tell them to go ahead. But after 3 days on the classifieds, I had a guy who was more than willing to check it out. He came and saw all the mods I had done and was impressed on how well it ran. He immediately gave me my asking price.

Here's the main reasons why I sold it. It was slow and needed tweaking all the time. I'm no stranger to wrenching on bikes, but after a while I just got tired of the constant attention. It wasn't tough to work on, its probably just as simple as working on a GY6 scooter. It had vapor lock issues, gearing was not right from the factory. Things would come lose all the time, the gas cap was bitch to try and close and ultimately it was just way too slow. When I would ride my 150cc GY6, yes I know it has 25 more cc's than the Clone, but the GY6 would just run so well. 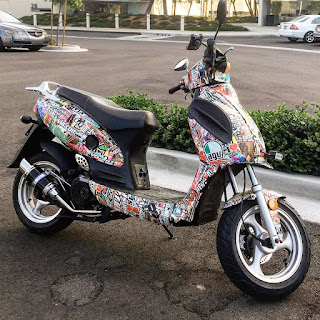 Another factor was I had 3 bikes in the garage that needed to be ridden and maintained. Having one less was easier to manage. Sure the Clone was fun around the neighborhood, but it really did lack the power needed to keep up with traffic. I guess I had higher expectations with this bike. I had to convince myself that I liked the bike and how fun it was, but in reality, I had buyer's remorse.
125cc 125cc motorcycle chinese grom chinese scooter chonda grom clone honda grom mini bike vader boom 125cc